Seien Sie der Erste, der dieses Produkt bewertet
3.999,00 €
Will be ordered for you.
If you need this very urgent, please contact us and we keep you informed about the delivery date.
Zur Wunschliste hinzufügen Zur Vergleichsliste hinzufügen

The Unicomp audio compressor combines the best features of both modern and classic audio compressors into a single, dual-mono unit. At its heart is a unique gain cell/sidechain combination which gives the Unicomp its own distinctive sonic character. 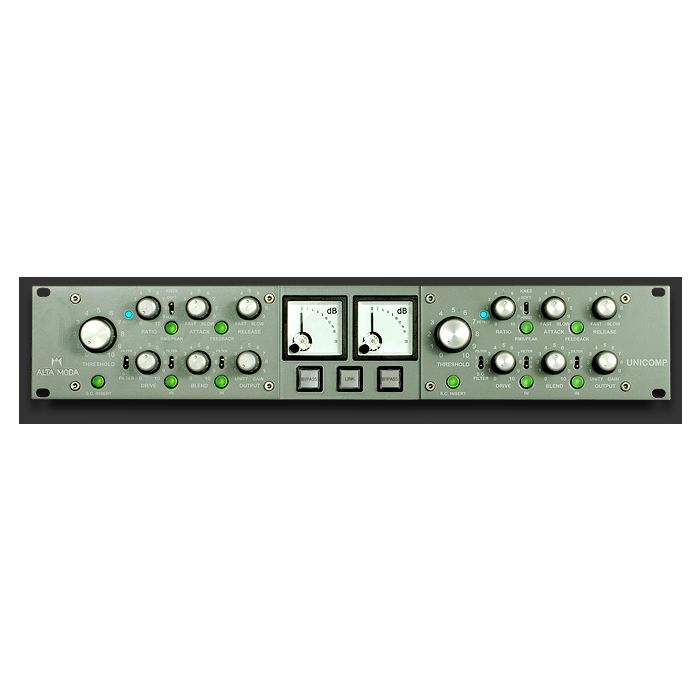 The Unicomp audio compressor combines the best features of both modern and classic audio compressors into a single, dual-mono unit. At its heart is a unique gain cell/sidechain combination which gives the Unicomp its own distinctive sonic character. The Unicomp’s comprehensive set of sidechain features gives it true versatility and accuracy which make the unit superbly suited for tracking, mixing and mastering applications.

The Unicomp boasts a fully discrete, class ‘A’, high voltage minimalist audio path. The amplifiers are DC servo-coupled, eliminating all coupling capacitors in the signal path.

The sidechain features a high accuracy logarithmic-scaled detector, with a choice of operating in RMS or peak rectifier modes. The Unicomp also allows the user, with a single switch, to change the compressor topology from a modern and accurate feedfoward detection scheme, to the classic and more colorful feedback approach; completely changing the sonic personality of the unit.

The Unicomp’s personality is further changed with the addition of the Warmth control. Turning this control adds rich, second harmonic distortion to the signal that increases as compression increases, adding even more character to the sound. A switchable filter changes the contour of the affected signal, useful when processing more complex signals, such as mixes.

Another unusual feature of the unit is the Blend control. The Blend control allows the operator to mix unprocessed signal back into the compressor’s output path. This gives one the ability to create a more subtle compression effect on tracks such as vocals, or for blending back dry signal when heavy bus compression effects such as drum submixes are being processed. A high pass filter is included which blends only the higher audio frequencies back into the output path.