Seien Sie der Erste, der dieses Produkt bewertet
415,00 €
Will be ordered for you.
If you need this very urgent, please contact us and we keep you informed about the delivery date.
Zur Wunschliste hinzufügen Zur Vergleichsliste hinzufügen

The Alyseum MS-MATRIX is a Eurorack module consisting of a dynamic matrix, both analog and digital in nature, which sports 16 inputs and 16 outputs. 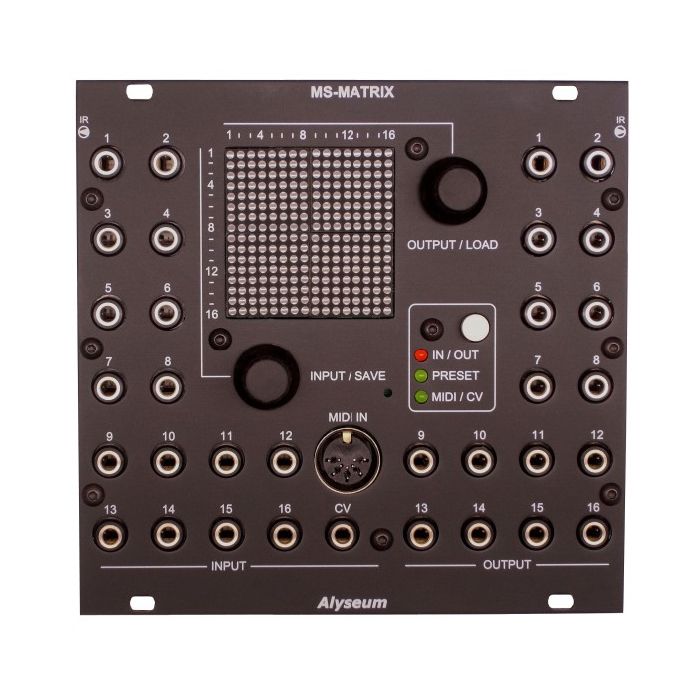 Back to the Matrix

The Alyseum MS-MATRIX is a Eurorack module consisting of a dynamic matrix, both analog and digital in nature, which sports 16 inputs and 16 outputs.
A special 256 LED display makes a fast, a friendly and intuitive graphical interface, each LED representing one of the 256 points of connections available.

The module accepts a variety of signals such as Gates, Clocks, CV and Oscillator simultaneously, while the different user configurations can be saved as user presets in 32 locations. These 32 presets can be recalled by hand, by a dedicated CV Input on the front panel, by MIDI (either incoming Note On or PGM CH).

The Input and Output expander mixer modules MS-VCA4I & MS-VCA4O can be controlled by the MIDI from the main unit via infra-red.
No need for additional cables which might cause ground loops or interferences!