Seien Sie der Erste, der dieses Produkt bewertet
3.519,00 €
Will be ordered for you.
If you need this very urgent, please contact us and we keep you informed about the delivery date.
Zur Wunschliste hinzufügen Zur Vergleichsliste hinzufügen
HORIZONTAL MODUL!! Taking the Legendary 1073 Design to the Next Level. Occupying a special place in engineers' and producers' sonic palettes and imaginations, the 1084 microphone preamplifier and equaliser module delivers an incredibly fat, smooth
Zum Ende der Bildgalerie springen 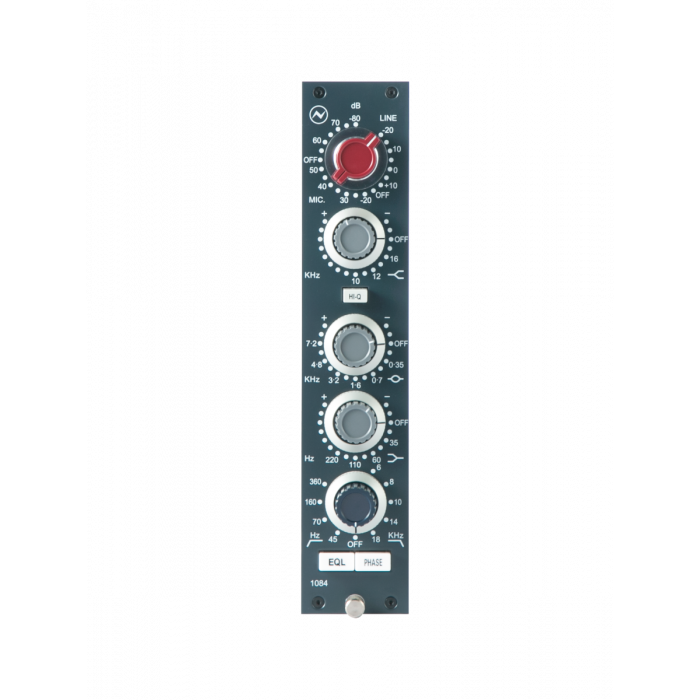 Taking the Legendary 1073 Design to the Next Level.

Occupying a special place in engineers' and producers' sonic palettes and imaginations, the 1084 microphone preamplifier and equaliser module delivers an incredibly fat, smooth sound. While the 1084 builds on the same basic design that made the 1073 world-famous, it offers a significantly different palette of frequency selections. The 1084 also features a 'Q' switch, allowing the user to choose between two different Q types, either narrow or wide with respect to the parametric band. Many engineers and producers prefer this module to the 1073 because of these added features and the 1084’s extended versatility.


The 1084’s three EQ bands provide selectable frequency, with cut and boost capability, and a mid-frequency band which benefits from a High Q Presence switch. The high pass filter can be switched between 45Hz, 70Hz, 160Hz & 360Hz, and the low pass filter between 6kHz, 8kHz, 10kHz, 14kHz, & 18kHz. Both boast 18dB per octave slopes.


Handcrafted and completely hand wired in Burnley, UK by Neve’s dedicated professionals, the 1084 reissue has been reproduced to the same exacting specifications of the original modules. While other manufacturers are content with merely copying the original 1084, Neve has remained faithful to the original—all the way down to the component level.


Where innovation has improved on previous technology, Neve has welcomed such improvements. However, not all things lend themselves to enhancement. Example: audio transformers. While other manufacturers use replacements, AMS Neve alone has access to the original hand-wound transformers. This is an important factor when you consider that an analogue preamp is only as good as its transformer. That is why only a Neve sounds like a Neve.


All Neve mic preamplifiers are designed to accept signals from a wide range of microphone and line sources. Uncompromisingly low noise and distortion with generous overload performance are noteworthy hallmarks of all Neve products.


Based on the same technology as the 1073, the 1084 Mic Preamp delivers classic Neve sound. Originally fitted into a custom-built A1085 console for Whitney Studios in Los Angeles, the original 1084 Mic Pre & EQ module offered recording engineers and producers a level of sonic precision previously considered unobtainable. The 1084 module soon became a firm favourite among engineers and producers, and was fitted into many Neve consoles throughout the 1970s.