Seien Sie der Erste, der dieses Produkt bewertet
5.159,00 €
Will be ordered for you.
If you need this very urgent, please contact us and we keep you informed about the delivery date.
Zur Wunschliste hinzufügen Zur Vergleichsliste hinzufügen

The Amtec Model 099 is a tube compressor/limiter based on the legendary
Fairchild 660. The unique character of the original unit is retained with an
addition of some new functions and options. 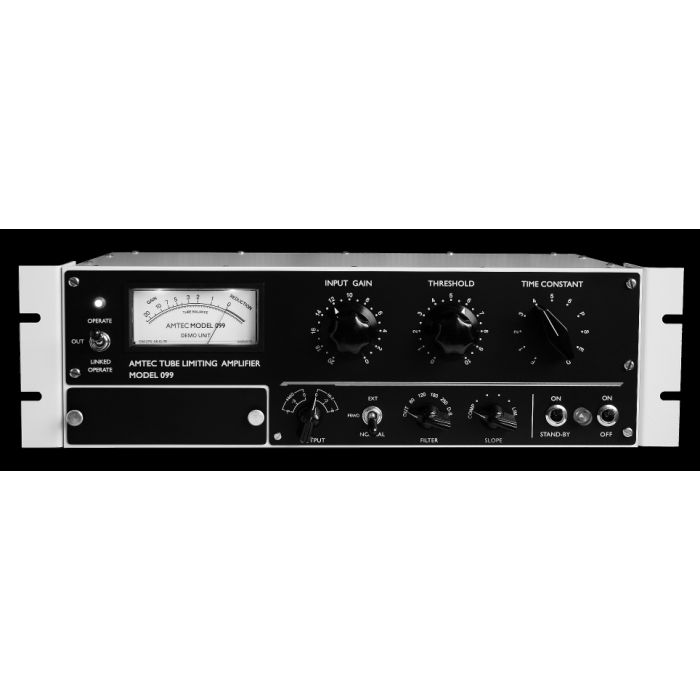 The Amtec Model 099 is a tube compressor/limiter based on the legendary
Fairchild 660. The unique character of the original unit is retained with an
addition of some new functions and options.

The signal path topology is the same as in its famous precursor from the
50's, but switchable output attenuator is also included. The
compression/amplification takes place in a single push-pull tube stage, that
consists of readily available tubes. The tubes form a feedbackless
amplification circuit with variable-mu characteristics that interfaces with
the outside world via high-quality custom input and output transformers.

The output attenuator allows to reduce the output level and increase the
input level, so that more harmonic content can produced by the 099.
The output attenuator control also acts as a termination switch. The
original Fairchild unit is unique in that the variable-mu tube gain stage
drives the output transformer directly and any load on the output that is
other than the proper 600 ohms load disturbs the operation of the gain stage
by changing its transfer function. It leads to restricted gain reduction law
and also changes the frequency response.
We eliminated the problem by including the termination switch. If the
following device has modern-style
high-impedance "bridging" input, it can be terminated right at the output of
the 099 (using the Hi-Z part of the switch), so that the overall load is 600
ohms.

The sidechain circuit that controls the actual compression has
transformer-balanced input and can be
internally routed from the output of the unit post-compression (i.e.
feedback topology that is typical to the Fairchild and majority of other
compressors, this position is marked NORMAL), from the input of the unit
pre-compression (feedforward topology, marked FRWD) or from the external
input on the back of the unit (position EXT).
This sidechain signal can be filtered, so that the compression is not
triggered evenly by the whole frequency spectrum. The rotary switch FILTER
lets the user to choose from no filtering, one of four low frequency cut
positions or the high frequency boost position marked D-S (de-essing).

The standard six time constans of the original Fairchild are preserved with
no changes to them and are marked 1 to 6 around the Time Constans knob.
These constans have fast attack time, so to greatly increase the 099's
versatility we added some new time constans. These constans are marked P, S,
E and D and offer longer attack times, therefore are better suited to
processing of drum and bass tracks, as well as the whole mixes. The position
D (like Drums) has especially long and uniquely shaped attack.
On the other hand, the position marked F is the faster version (both attack
and release) of the standard preset 1.
The unmarked position at the bottom of the switch disables any compression.

One feature of the 099, particularly rarely seen in pro-audio equipment, is
presence of the Stand-by switch. It allows to greatly reduce anode voltage
supply, while keeping all of the other internal voltages intact (including
the heater supply) and thus preserving the tube life, while not in use for
prolonged period.

Unlike the original unit, the gain reduction meter scale in the 099 is
accurate.

The entire calibration of the unit and the tube replacement can be done
without the need to take the unit out from the rack. Each tube in the 099
has independent balance trim control making the calibration quick and easy.