Seien Sie der Erste, der dieses Produkt bewertet
1.730,00 €
Will be ordered for you.
If you need this very urgent, please contact us and we keep you informed about the delivery date.
Zur Wunschliste hinzufügen Zur Vergleichsliste hinzufügen
Compressor/Limiter
Zum Ende der Bildgalerie springen 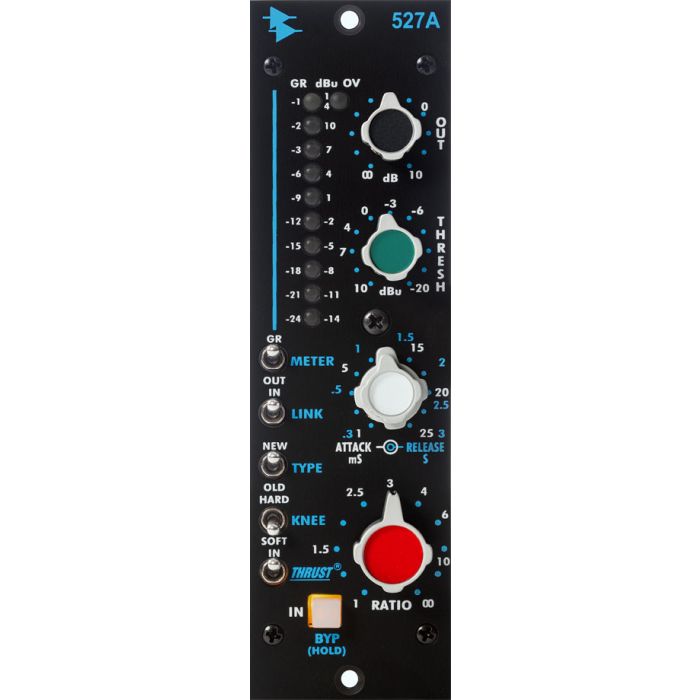 The API 527A Compressor/Limiter takes its place alongside the family of API VCA based compressors, including the 225L compressor and 529, 2500, and 2500+ stereo bus compressors. Anyone familiar with these units will immediately be at home with the 527A.

Features common to the line include "feed forward" (NEW) and "feed-back" (OLD) gain reduction methods selectable on the front panel, provide a choice of "that old way" or "the new way" of compression, for the highest level of flexibility in signal gain control. The "old way" or feed-back method is what most of the classic compressors used for the gain control circuit. The "new way" gain reduction is more typical of the newer VCA type compressors that rely on RMS detectors for the gain control voltage.

There is a "SOFT"/"HARD" knee switch for an "over-easy" type compression resulting in a very natural, uncompressed sound or a typical sharp knee type that lends itself to a much more severe limiting effect.

The patented THRUST® function can be switched in and out via the front panel as well, applying a filter before the RMS detector circuit that preserves that punchy bottom end.

Two or more 527A Compressor/Limiters can be linked together via a DC link allowing multiple units to be combined for stereo and multichannel applications.

The output level remains fairly constant regardless of the threshold or ratio control, much like the "more/less" Ceiling control on the API 525 Compressor. This allows for live adjustments without any noticeable gain changes in the program level.

The 527A Compressor/Limiter makes use of the 2510 and 2520 discrete op-amps and exhibits the reliability, long life, and signature sound which are characteristic of API products.