Seien Sie der Erste, der dieses Produkt bewertet
3.790,00 €
Will be ordered for you.
If you need this very urgent, please contact us and we keep you informed about the delivery date.
Zur Wunschliste hinzufügen Zur Vergleichsliste hinzufügen 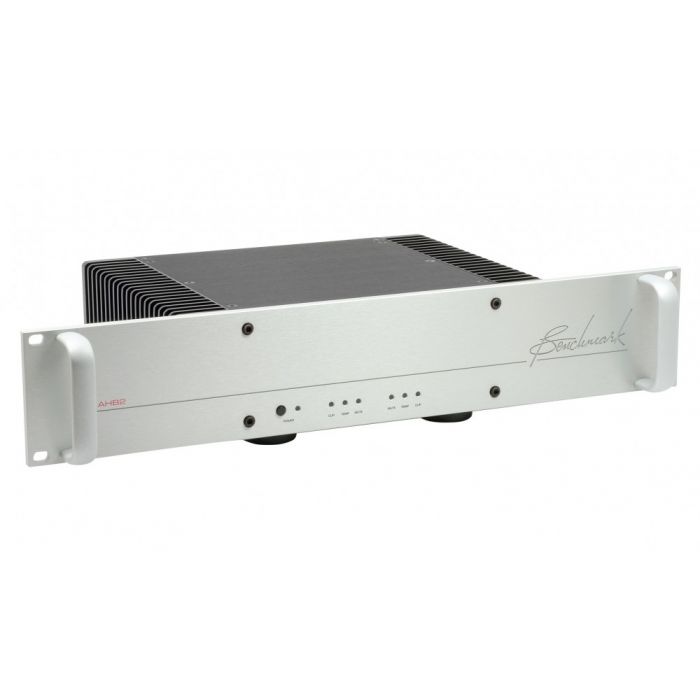 Power amplifiers are usually a weak link in the audio chain. High-resolution recording formats and converter technology have outpaced the development of improved power amplifiers. Benchmark DAC2 D/A converters outperform most high-end power amplifiers by very significant margins. Most power amplifiers limit system noise performance to the equivalent of a 16 to 18-bit digital system. The details captured by today's high-resolution 24-bit PCM systems are often lost in a veil amplifier noise and distortion.

Benchmark's goal was to build a power amplifier that could deliver the full performance of their flagship DAC2 converters, and today's finest high-resolution recordings. The AHB2 realises this goal.

High-Resolution audio is only as good as the weakest link in the playback system. Benchmark's AHB2 power amplifier delivers musical details without introducing the masking effects of amplifier noise and distortion. The dynamic range of the AHB2 approaches 130 dB, making it 10 to 30 dB quieter than the typical reference-quality power amplifier. You will discover previously overlooked nuances, dynamics, and detail in your favourite recordings and experience the full potential of the latest high-resolution 24-bit PCM and 1-bit DSD audio formats. The AHB2 delivers true High-Resolution Audio.

The AHB2 has a high damping factor that augments its extended low-end to deliver solid, well-controlled bass. It’s a stunning experience to finally hear full bandwidth high-resolution playback. The AHB2 allows you to escape the distortion limitations of classic amplifier topologies and enter the world of high-resolution audio playback.

The AHB2 breaks is a significant departure from traditional designs. Two new patented feed-forward error-correction technologies eliminate most sources of distortion. An unconventional power supply maintains tight regulation and low ripple while minimising magnetic fields. A low-gain topology optimises the gain staging between the D/A converter and the power amplifier while minimising noise. Sophisticated shielding and star-quad signal distribution provide outstanding immunity to interference. The result is that the AHB2 has a signal to noise ratio that approaches 130 dB while distortion is at or below the measurement limits of the finest test equipment.

The patented feed-forward error-correction used in the AHB2 is so effective that biasing of the output devices can be reduced or even entirely eliminated. Benchmark has chosen to maintain a small bias current in the output stage, but this bias current is not critical to the distortion performance of the unit. The benefit of low bias current is that very little power is wasted as heat. The feed-forward error correction also allows the use of tracking power supply rails.  These tracking rails significantly improve the overall efficiency of the amplifier while the error correction keeps distortion nearly nonexistent. The AHB2 rivals the efficiency of Class-D amplifiers while exceeding the sonic performance of power-hungry Class-A designs.

Most high-quality power amplifiers have linear power supplies, large toroidal transformers, and large banks of energy-storage capacitors. These linear supplies are usually unregulated and the capacitors help to remove ripple produced by the audio and by the AC line. In contrast, the AHB2 uses a resonant switching power supply that has a very fast control loop. This control loop responds to audio-frequency load changes and keeps the supply voltage constant without the use of a large bank of capacitors. This active regulation is much more effective than capacitive energy-storage. Maximum power output of the AHB2 does not vary with line voltage or audio loading. The power supply rails maintain a constant voltage during audio peaks.

Benchmark has now combined the best characteristics of class AB and class A amplification to create an amplifier that outperforms both of these traditional designs. Two new technologies that address crossover distortion are incorporated into the new AHB2 design.

These patented technologies virtually eliminate crossover distortion while offering opportunities to improve efficiency, damping factor, and dynamic range. The patented technology solves the crossover problem by combining a plurality of output stages such that one stage drives the output while another stage enters a crossover region.

The low-noise input amplifiers on the AHB2 are equipped with precision balanced inputs.  Benchmark considers balanced inputs essential in a true high-resolution system.

The AHB2 is a low-gain design.  Maximum output is not reached until the balanced inputs reach +22 dBu.  This is a much higher signal level than is used at the input of most power amplifiers.  High interface signal levels are required to achieve the best possible system signal to noise ratio (SNR).  Most power amplifiers have far too much gain and consequently they suffer from poor noise performance. The AHB2 is 17 dB quieter than some of the very best power amplifiers on the market.  A rear-panel gain switch can be used to set the AHB2 at higher gain settings if necessary. The low-gain setting is designed to interface directly with Benchmark DAC2 converters.

The main features of the Benchmark AHB2 include: