Seien Sie der Erste, der dieses Produkt bewertet
1.099,00 €
Will be ordered for you.
If you need this very urgent, please contact us and we keep you informed about the delivery date.
Zur Wunschliste hinzufügen Zur Vergleichsliste hinzufügen
RedNet R1 is a desktop remote controller that unleashes the power of Focusrite Red interfaces. It's designed for professionals who need to adapt their audio configurations quickly to suit the ever-increasing demands of the studio environment. Combine, select and switch audio from any conceivable source to a multitude of common (or user-defined) monitoring environments, and control large groups of speakers from a single set of controls.
Zum Ende der Bildgalerie springen 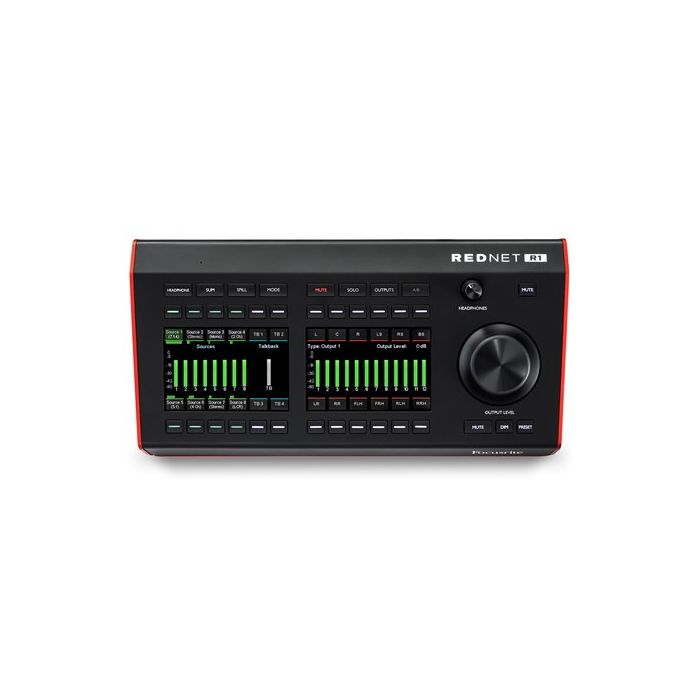 RedNet R1 enables users to interact with their audio system like never before. It provides the flexibility to control a range of different monitor output setups, ranging from mono through to 7.1.2 surround, including Dolby Atmos® and other immersive audio workflows. Alternatively, completely custom setups of up to 12 outputs can be configured for bespoke speaker configurations. RedNet R1 can be used to control groups of outputs from a Red interface's multitude of sources and destinations, including from Pro Tools | HD and other DAWs, analogue inputs and outputs, ADAT and S/PDIF connections, and from entire Dante audio ecosystems, simultaneously and interchangeably.

RedNet R1 supports a maximum of eight input sources from 32 available audio channels, across analogue, digital, DAW and Dante connections, and mixes and routes signals to up to 12 monitor output channels. Top-panel control includes level, reference level preset selection, cut, dim, mute and a variety of solo modes. There's an A/B switch for switching between numerous monitoring presets, and up to four fold-down presets allow fast switching for checking downmixes. Custom cue mixes can be sent to talent from any of the 32 available inputs.

RedNet R1 also features a Dante-enabled talkback section, internal mic-pre and a high-powered headphones output, so you can interact with your Dante system like never before. Up to four talkback destination groups are available when used with a Red interface. (When used with other Dante devices, a single talkback group is available.) RedNet R1 has an internal microphone, or users can connect their own microphone via the rear-panel XLR. The high-fidelity headphone output is powerful enough to deliver high-SPL audio to high-impedance headphones.

RedNet R1 features two LCD displays for highly accurate level metering of the outputs, sources and headphone outputs, and for giving visual cues for navigating around menus. The unit is configured using RedNet Control 2, the software manager designed primarily for ease of use in quickly setting up both simple and complex monitoring and routing configurations. Other features of the RedNet R1 include a quarter-inch jack socket, which accepts a footswitch for talkback management, LFE muting and more. It can be powered via Ethernet to reduce cabling complexity (using the PoE standard), or by a DC power supply.