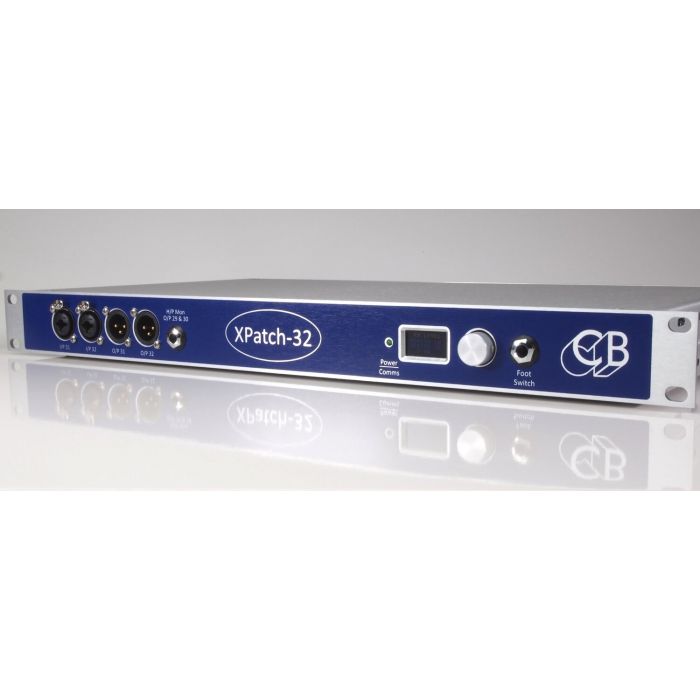 The XPatch-32 system is controlled by our XPatch-32 program via USB, allowing for complex routings in seconds. Create, store and recall routings from sessions. Any input can be sent to multiple outputs. The XPatch-32 design is based on the A-Mon / I-Mon and shares the I/O and CPU cards, allowing for input and output muting and even gain control.

The front panel is equipped with 2x XLR combo connectors for input XLR line-level / ¼ inch jack DI input, plus 2 XLR output for quick auditioning of equipment. Also included are ¼ inch jack for headphone monitoring of inputs and outputs, OLED display and encoder with push button for function selection. In addition, there is a ¼ inch jack socket for a switch to step through snapshots (presets).

Once configured, XPatch-32 can operate independently of the XPatch-32 program and host computer via the front panel encoder or foot-switch. By switching between snapshots, the foot-switch enables the XPatch-32 to be used as a powerful studio or live performance tool for musicians.

In any studio, the XPatch-32 can make it quick and easy to use your favorite new and legacy hardware effect’s units in your mix.The XPatch-32 is a versatile stand-alone analogue routing/switching system for on-stage boutique instrument processing or amplifier selection.

Metering of inputs and outputs

The X-Patch-32 inherits 8 channels of metering from the A-Mon/I-Mon, these are connected in parallel with outputs 25 - 32 and can be viewed in the Mac/Windows GUI.

When used with a TMC-1 or TMC-2 part of the XPatch-32 may be configured as the monitoring system for any format from stereo up to 7.1.4. The channel count,cue sends and talkback and listen back are user configurable allowing for the XPatch-32 to split between monitoring and electronic patch to suit user requirements.