Seien Sie der Erste, der dieses Produkt bewertet
3.699,00 €
Will be ordered for you.
If you need this very urgent, please contact us and we keep you informed about the delivery date.
Zur Wunschliste hinzufügen Zur Vergleichsliste hinzufügen

The Most Advanced Stereo A-D on the Market 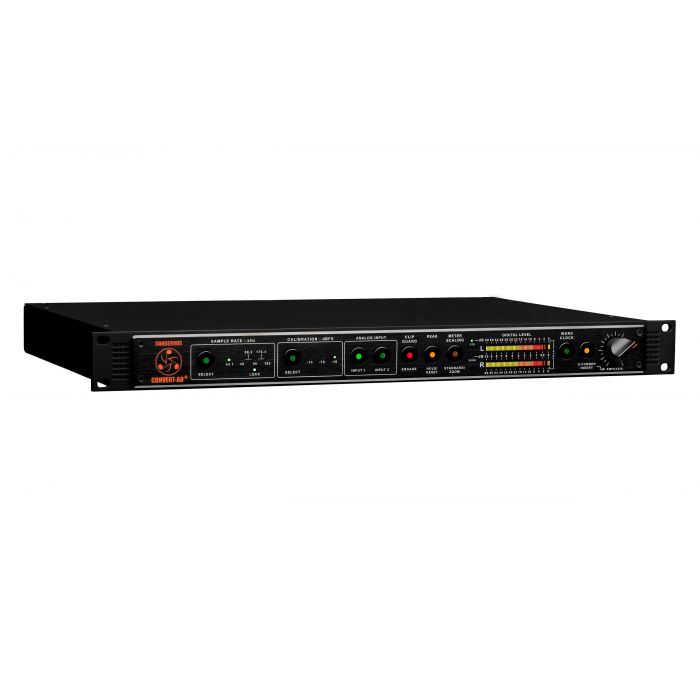 THE MOST ADVANCED STEREO A-D ON THE MARKET

If you thought analog-to-digital converter innovation had taken a snooze, Dangerous Music is about to wake you up with five game-changing innovations. Packed into a single rack space with our next-generation conversion for the ultimate in musicality and transparency, the CONVERT-AD+ is the most advanced stereo analog-to-digital converter on the market.

The CONVERT-AD+ has no fewer than five—five!—features previously never seen on an analog-to-digital converter before. Smart, useful, well-executed innovations put Dangerous Music on the map, and we continue that tradition into the 21st century with the CONVERT-AD+.

Simple, elegant, intelligent. With the push of a button, you can switch between any two balanced line input sources. With zero fuss, you can instantly compare different mastering chains, test your mix against a reference, or to switch between recording and mixing mode—or use the inputs in any configuration you dream up. From the largest mix rooms, to elite mastering suites, to your home studio, the switchable inputs on the CONVERT-AD+ is about to make everyone’s life a lot easier.

Imagine driving straight past a cop at 110mph and showing only 55mph on the radar gun. That’s what mixing, mastering, and tracking with Clip Guard is like. The CONVERT-AD+ employs a proprietary technology that simply removes all clipping from your digital prints, but it never changes the sound—even when you’re clipping the converter on purpose for tonal artifacts. Today’s digital playback platforms (iTunes, Spotify, etc.) have filters (like highway cops) that scan for clipped masters and reject and/or attenuate them. Now you can clip your A-D converter to your heart’s content and never face the consequences.

In most circumstances, the dynamics of a mix or master reside in the zone between the average and the peak levels. With our meter zooming technology, you can zoom in on just the top 10dB of dynamic activity, allowing you a fine-grained look at what that matters most when mixing and mastering. An incredibly helpful tool for nuanced crafting of dynamics, you’ll soon wonder how you ever lived without zoomable meters.

It’s no secret that a pair of transformers at the end of a mixing or mastering chain can give your final prints added heft, character and articulation. With the CONVERT-AD+, just push a button and you’ve got a pair of Hammond transformers wired in series, ready to do that magic that transformers do. Hammond is a Canadian company with over 100 years of transformer design, and our circuit brings out all the bold colors.

Our analog designer Chris Muth did it again, taking his deep and esoteric knowledge of what engineers love and turning it into a simple and effective tool. When the transformers are switched in, the Emphasis kicks in a proprietary EQ/compression combo that brings a whole pallet of different colors to your mixing, mastering, and tracking work. Simply dial in the right amount, or none at all, until the smiles in the room get wider. In most cases, you’ll notice a stronger low end footprint and a gentle saturation on the mids and highs. The more you play with it, the more you’ll learn how Emphasis can improve your music.

SOUND YOU CAN TRUST AND LOVE

Previously an oxymoron, musical transparency makes perfect sense now that Dangerous Music has pushed its products to the bleeding edge of today’s technology. We deliver an open, full-bodied sound free of unwanted artifacts (transparency) with a bold and big three-dimensional sound (musicality). The result is sound that you can trust and love.

Among those who truly understand this hotly debated area of audio technology, the mantra with digital is implementation, implementation, implementation. How components are selected, tweaked and assembled according to a specific design, and then tuned for superior performance within that plan, is what sets a converter apart – for better or worse. The Dangerous Music CONVERT-AD+ has been developed by a team of experts with deep, up-to-the-minute knowledge of the best digital and analog converter technology available today. Our implementation has even managed to get the clock working better than it’s stated specs.

JET is a patented clocking technology that Dangerous Music employs in order to reduce jitter to the point where it simply isn’t a factor impacting the sound of our converters. Whenever zeros and ones are flying by at incredible speeds, a solid clock and balanced data stream management system is of the utmost importance to articulate, musical, 3D impact. Do not shy away from using the CONVERT-AD+ as your studio’s master clock, a choice more and more engineers are making since becoming “converts.”

Our analog designer, Chris Muth, has designed the gear used on an endless list of hit records and classic reissues. Chris’s powerful, articulate, hi-fi designs dominated the big studios in New York City since the 80s, and via Dangerous his designs have become essential components in the best modern DAW-based mixing and mastering studios. When we set out to develop the CONVERT-AD+, Chris brought his relentless design philosophy and world-renowned sound to a whole new level. The entire CONVERT series has the jaws of top pros hitting the floor when they hear the big natural sound, the powerful, ultra-clear low-end, and the wide open high-end.