Seien Sie der Erste, der dieses Produkt bewertet
1.699,00 €
Will be ordered for you.
If you need this very urgent, please contact us and we keep you informed about the delivery date.
Zur Wunschliste hinzufügen Zur Vergleichsliste hinzufügen

With a DiGiGrid MGB MADI-to-SoundGrid interface, real-time low-latency networking and processing is only an Ethernet cable away. 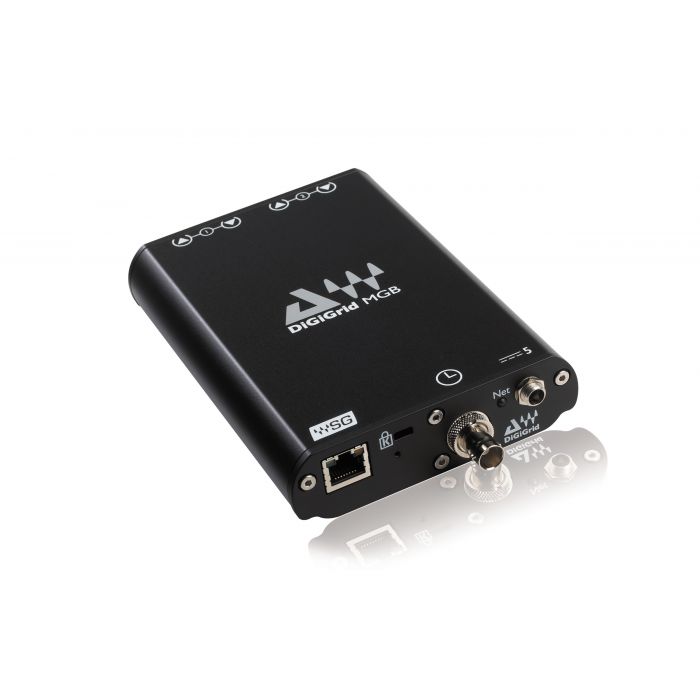 Compact and portable, the DiGiGrid MGB interface lets you plug any coaxial MADI-enabled device into the power of the Waves SoundGrid networking and processing platform. Record, process and playback up to 128 audio channels, using literally hundreds of Waves and third-party plugins, with super-low latency, clocking in at only 0.8 milliseconds! You can even record to two computers simultaneously: One for virtual soundcheck, the other for backup. So if you’re on the tour bus, in your hotel room, at the airport – wherever – you can quickly and conveniently setup your next show, using only your laptop.

With a DiGiGrid MGB MADI-to-SoundGrid interface, real-time low-latency networking and processing is only an Ethernet cable away.

Plug the MGB straight into your computer to record up to 128 channels with simultaneous playback of 128 channels. Add a SoundGrid DSP server and DiGiGrid SWI network switch plus Waves MultiRack SoundGrid host application, and your MADI-compatible live or broadcast console now has real-time low-latency processing capabilities. And if you require a higher level of audio quality, a simple configuration change switches the MGB to 96kHz, for 64 channels of recording and 64 channels of simultaneous playback.

The MGB installer includes the relevant drivers and software for your unit: the SoundGrid ASIO/Core Audio driver, the SoundGrid Studio Application, the eMotion ST mixer, StudioRack, and the MGB Control Panel.

The SoundGrid Studio System is the next generation of sound technology. It is a real-time processing and networking platform designed to bring your studio up to light speed. It allows your DAW to offload its plugin processing to a SoundGrid DSP server and enables your devices to communicate with one another and with the devices of the facilities you work with. The SoundGrid Studio System integrates seamlessly with all DAWs and DiGiGrid (or other SoundGrid-compatible) I/Os, providing endless possibilities for setups of every size—from a single DAW with one DiGiGrid I/O, to an entire network of host computers, I/Os, and SoundGrid DSP servers.

StudioRack is a software rack dedicated to running plugin chains. The processing of each chain can then be directed to your host computer’s CPU or to a SoundGrid DSP server, as you choose. When you process your plugin chains on the SoundGrid server, StudioRack lets you monitor your tracks in extremely low latency via the eMotion ST mixer.