Seien Sie der Erste, der dieses Produkt bewertet
119,00 €
Will be ordered for you.
If you need this very urgent, please contact us and we keep you informed about the delivery date.
Zur Wunschliste hinzufügen Zur Vergleichsliste hinzufügen
A-137 is a voltage controlled Wave Multiplier. The basic idea of a wave multiplier is to multiply the waveform of an incoming signal (e.g. triangle/saw/sine from a VCO) within one period of the waveform.
Zum Ende der Bildgalerie springen 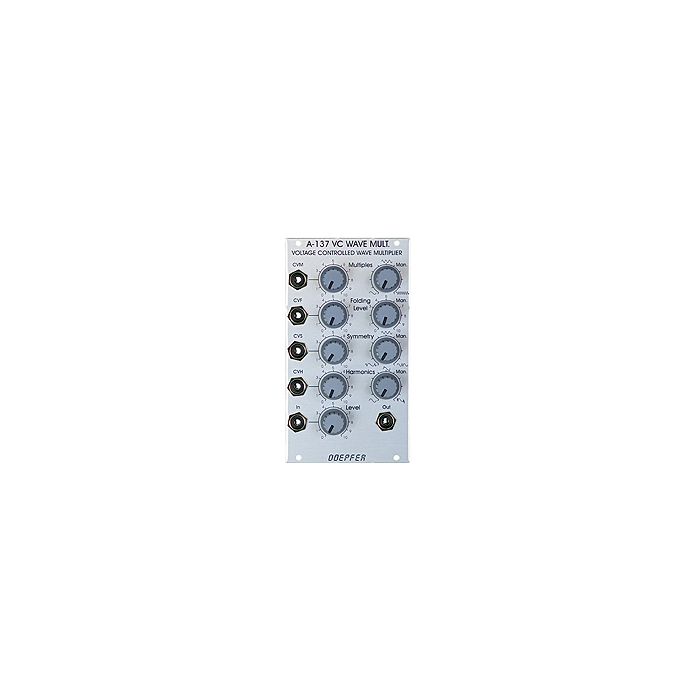 A-137 is a voltage controlled Wave Multiplier. The basic idea of a wave multiplier is to multiply the waveform of an incoming signal (e.g. triangle/saw/sine from a VCO) within one period of the waveform.

This leads to additional harmonics of the incoming signal. The period and consequently the pitch of the signals remains unchanged (in contrast to frequency multiplication e.g. with the PLL module A-196).

The A-137 can be used with signals rich in harmonics too (e.g. saw) but the effect is not as remarkable as for triangle or sine waves. For rectangle signals none or only little effects are obtained.

The A-137 is a very sophisticated wave multiplier that offers much more features, more controls and more waveform manipulations than other wave multipliers available so far. In addition all parameters are both manually adjusted and controlled by external voltages.

These are the features of the module:

The Multiples parameter (manual and ext. CV) defines the number of basic wave multiplications within one period.

With the Folding Level and Symmetry parameter (both manual and ext. CV) the upper and lower clipping levels of the wave folder units are controlled.

The Harmonics parameter (manual and ext. CV) adds some harmonic content by sharpening the waveform edges and adding overshoot peaks. It works a little bit like the resonance control of a VCF.

The module is fully DC coupled, i.e. even control signal can be processed with the modules.