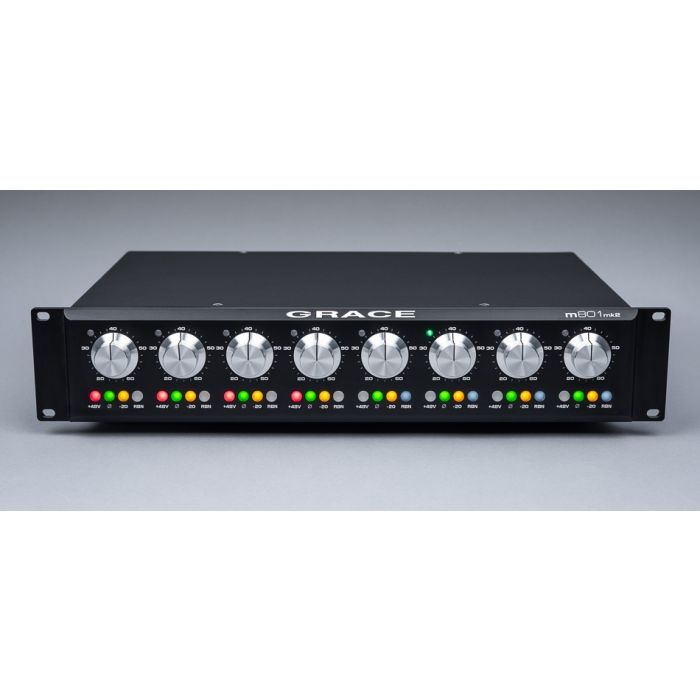 In 1994 we released the Model 801 microphone preamplifier, which was the first production model for Grace Design. It set a new standard of sonic quality and reliability for microphone preamplifiers, providing much better performance than the built-in circuits in the recording consoles of the day. It featured independent circuit boards for each channel, gold contact rotary gain controls wired with precision metal film resistors, a musical sounding transimpedance (current feedback) gain stage, gold contact sealed relay signal switching, and there were NO electrolytic capacitors in the signal path.

12 years later, we released the next generation of this preamplifier, renamed the m801, which refined the design features of the previous version, and added a fully differential signal path and Ribbon Mic mode, which optimized the signal path for low output ribbon microphones.

Today’s modern recording studio is invariably loaded with incredible sonic processing capability, making the opportunity to add great sounding color routine. But capturing the magic at the front end is still the job of skillfully designed analog hardware, for which there is no substitute. This makes our preamps more relevant than ever. If your source sounds great and your mic is plugged into the m801mk2, you’ll be rewarded with a recording of breathtaking depth and realism. If you choose to color it up from there, you’ll be starting with the best possible raw material you can get.