Seien Sie der Erste, der dieses Produkt bewertet
4.149,00 €
Will be ordered for you.
If you need this very urgent, please contact us and we keep you informed about the delivery date.
Zur Wunschliste hinzufügen Zur Vergleichsliste hinzufügen 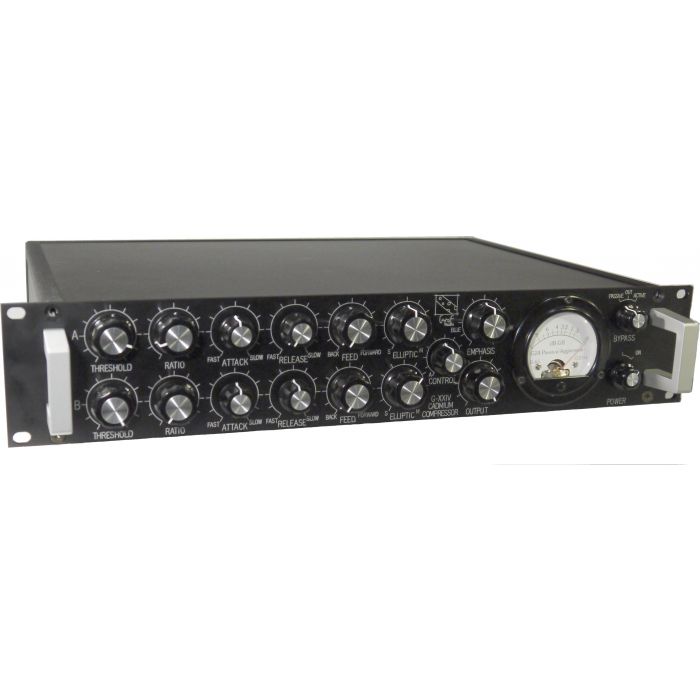 - Dual sidechain. No, not just a dual-mono option, but two separate stereo-compressor sidechains acting simultaneusly on the signal. Equals two separate stereo compressors. You can use one to grab short transients with fast timong, and the other to slowly ride gain... On top of this we give you the "Control" pot, that morphs seamlessly between the two compressors

- Compression Fully variable from FeedForward to FeedBack. Now wait, two individual compressors, you say: But how do we decide which of those comes first? Kinda important factor in compression, is it not? Aah yes. We included a "Feed" control for your convenience, allowing you to dial in a setting from feed-forward to feedback INCLUDING everything in-between. You are not limited to having just one of them first (or last) - you can set both of them as you want, e.g. having both first (!). Uh - and you can set them in-between also, off course - you may realize that FF and FB compression are subjectively perceived as two very different beasts - and the continous fade between their ways makes a lot of sense.

- Mono-compatible Sidechain signal summing for M/S collapsing to make sense. When initially trying to think up this compressor, the main design obstacle was about keeping the sidechain (relatively) simple. As we really want both L, R, M, and S to be able to contribute to the derived control voltages (because it's a MS-compressor as well as a LR), we could not simply add input/output signals to derive a singular signal for the sidechain, as this would completely cancel out the "Side" part of the signal, leaving us with only "Mid" component. One - in reality almost impossible - option would be to build four tracking sidechains, and then sum them before Ratio control. What we did is something old and new: We re-purposed an ancient signal processor that was designed to maintain mono compatibility for stereo signals e.g. when transmitted over AM - this processor shifts signal phase +90 and -90 degrees in the two (LR), which ensures that when adding the two channels after processing, you get +3dB Side component and +3dB Mid, in stead of loosing all "S" and getting +6dB of "M"