Seien Sie der Erste, der dieses Produkt bewertet
4.229,00 €
Will be ordered for you.
If you need this very urgent, please contact us and we keep you informed about the delivery date.
Zur Wunschliste hinzufügen Zur Vergleichsliste hinzufügen 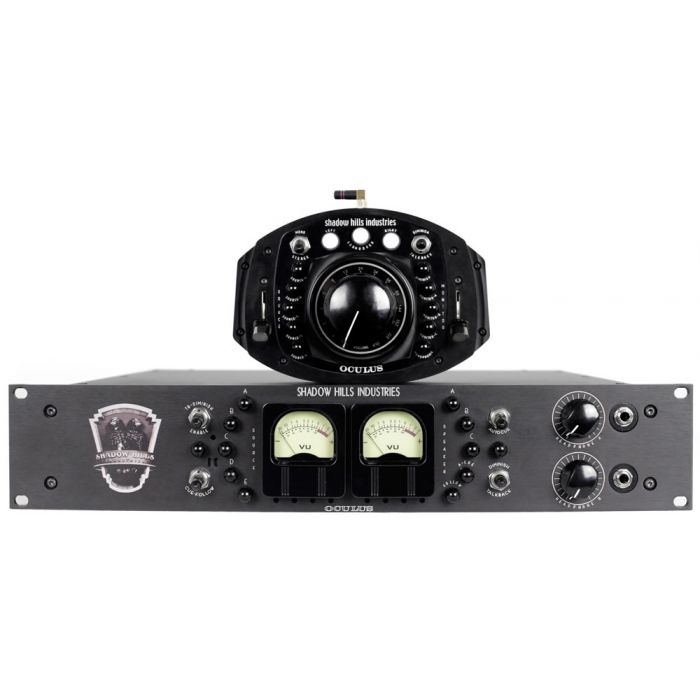 Shadow Hills Industries has done it again! The Oculus monitor controller is a striking centerpiece to your studio control room, providing crucial functionality and performing to top-notch specifications. Monitor reference level control, talkback, autocue, Class A headphone outs, and more, bring the necessary elements of your studio's workflow at your fingertips. Install the rack unit in your 19" rack and perch the Remote Pendant proudly on your desk surface or console, with wireless operation keeping things nice and tidy at your workstation.

Shadow Hills took the long road, cutting no corners and sparing no expense to make the Oculus, the finest monitor console ever made. Drawing from years of experience creating some of the most coveted mastering compressors and summing mixers, Shadow Hills designed the Oculus with an utter devotion to audio integrity. The Remote Pendant wirelessly controls the esoteric architecture and mastering-grade topologies of the Oculus. This intuitive tactile interface is machined from a solid piece of aluminum, uniting technical innovation with sonic purity to create the ultimate reference monitor controller.

A properly implemented discrete passive attenuator will always provide superior sound quality over any other topology. This is why nearly every mastering suite, where the price is no object, utilizes this design.

All Mute: Pulling the Pendant volume knob up enables a full mute of the monitor outputs.

Left/Right Subwoofer Mute: The Pendant push-buttons above the volume Individually mute each speaker.

Mono/Stereo: The pendant switch for Mono/Stereo selects the mode in which signal is sent via the monitor outputs. This switch is after the Left/Right mutes. The mono signal playing out of both speaker is derived the unmuted channel or channels. Thus it is possible to hear the left channel in both speakers by muting the right channel, or vice versa. This is a true 'Mono Sum' for monitor troubleshooting and phase coherency. The 'Monophonic' LED on the Pendant is lit when the output is in mono.

Diminish: This reduces the volume in the monitors by half for ease of communication without the requirement of a 'full mute' from the monitors. The LED above the 'Diminish Talkback' switch on the base station, as well as the 'Diminish' LED on the pendant, are lit when the monitors are diminished in volume.

Talk Back Diminish Enable: When this feature is enabled, whenever Talkback is engaged, the Monitor outputs dim. If this is not enabled, then the Monitor outputs stay at normal volume while the talkback microphone is active. The LED below the 'TB-Diminish' switch is ON when the feature is enabled, and the 'Diminish' LEDs on the base station and pendant are lit when the monitor dim is occurring. This feature also works in conjunction with the 'Autocue' feature.

Auto Cue: Auto Cue is a feature by which the talkback microphone is automatically switched on when source material has stopped playing and is switched off when the source material plays. In other words, it frees the engineer from having to press the talk back switch between every take of a performance. To use the Auto Cue feature, the engineer must patch in a “play signal” into the Auto-Cue input on the back of the base station. Signals such as SMPTE time code or a -10 decibel test tone played back from a striped track are appropriate. During playback, the Talk Back function should still operate as normal. If the Talk Back switch is engaged and playback is detected, the Talk Back microphone will then be turned on. This is useful for instruction the musicians during a take.The 'A-Cue' LED is lit when this feature is enabled.

Cue Follow: On the base station, there is a separate pair of stereo outputs for headphones called the cue output. When Cue Follow is NOT engaged, the cue is always fed via Source-E, regardless of where the main source select switch is positioned. This allows the engineer to monitor a different source as the performers.
When CUE Follow is engaged, the CUE feed “follows” the source selected via the Source Select switch. For example, if the Source Selected is C, then the CUE will be fed the source C signals as well. The 'Follow' LED on the base station is lit when this function is enabled.

Class-A Active Buffer for Source A: For unbalanced feeds into the Oculus, or for any other situation where an active, buffered balanced input is needed, use Source A. Enable the Buffer by depressing the small pushbutton labeled ‘Active Buffer Engage’

Talkback Remote: This 1/4” jack on the back panel enabled an alternate trigger for engaging talkback in the Oculus. When any passive, unbalanced 1/4” switch is used that shorts the tip to ground upon activation, talkback is enabled. This remote can be used in parallel with the existing momentary 'Talkback' switches on the Pendant and Base Station.