Seien Sie der Erste, der dieses Produkt bewertet
3.688,00 €
Will be ordered for you.
If you need this very urgent, please contact us and we keep you informed about the delivery date.
Zur Wunschliste hinzufügen Zur Vergleichsliste hinzufügen 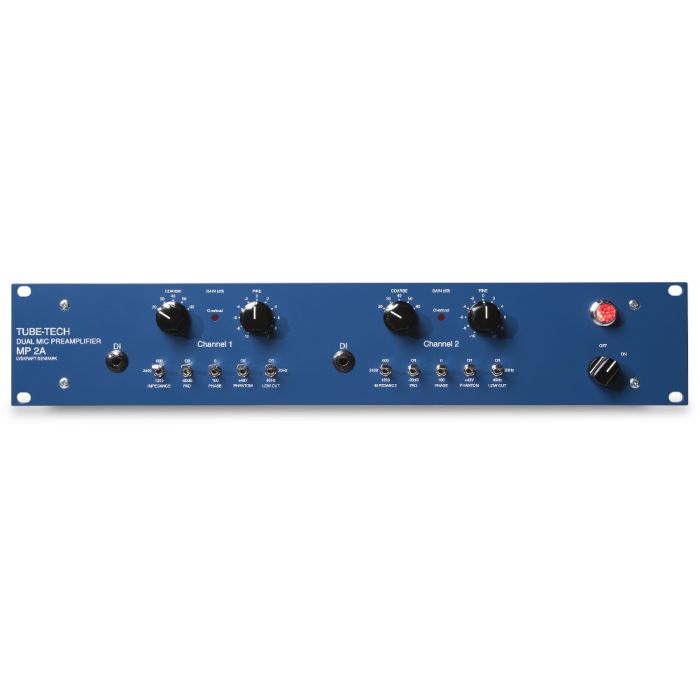 The MP 2A is a combined mic preamp/DI, based on a classic TUBE-TECH design, but featuring even higher fidelity and a few new features: An impedance switch to match the input perfectly to all types of microphones, an overload indicator and 2 dB gain steps. The MP 2A is the second in the new range of upgraded microphone preamplifier/DI's (the modular PM1A was the first). These new preamps features even higher headroom and fidelity than the earlier TUBE-TECH micpre''s.

Serious listening tests of the MP 2A have revealed a sound quality second to none, placing it among a handful of the worlds very best designs.

The MP 2A DI continues the TUBE-TECH tradition of extremely good sounding DI's, delivering world class sound for bass and guitar DI recordings. You simply won’t find a better DI than this!

The TUBE-TECH MP 2A is a combined Microphone Preamplifier and Direct Instrument amplifier. The input provides switchable +48 V phantom power, selectable mic. impedance of 600/1200/2400 Ohm, phase reverse switch, low-cut filter (20 Hz/40 Hz/off), as well as a switchable -20 dB pad. Gain is adjustable from +10 dB to +70 dB.( 10db steps, coarse +2 dB steps, fine.) The Direct Instrument Input are unbalanced with a gain ranging from + 10 dB to + 60 dB. The amplifier is all tube. Input transformer is enclosed in a MU-metal can. Input and output transformers come with a static screen between the primary and secondary wirings. The input and output are balanced as well as fully floating.

"I absolutely love the TUBE-TECH MP 2A! What a stunning mic amp. Used it on a record for vocal and double bass and then did all my overdubs on it and couldn't have asked for any more from it. As big and beautiful as any of the N**** mic amps (but with less noise) in the studio." - Garry Boyle, Castlesound UK

“I used the new Tube-Tech MP 2A in my current production of the German band Jupiter Jones and I am delighted: This new preamp has a charming but also very classy character which works excellent on various instruments I used it with. Really great (or “really cool”)!” - Wolfgang Stach, Producer and owner of Maarweg Studio 2, Cologne, Germany

"The PM1A for me is probably the best Preamp I ever recorded with. Vocals instantly fall into place and sound just right. Same thing with guitars! It gives me the rich and fat sound I am looking for." - Bassel El Hallak, Producer, Songwriter, Musician,Session Guitar Player, Hamburg , Germany