Seien Sie der Erste, der dieses Produkt bewertet
3.549,00 €
Will be ordered for you.
If you need this very urgent, please contact us and we keep you informed about the delivery date.
Zur Wunschliste hinzufügen Zur Vergleichsliste hinzufügen
PAFOUR Wunder Audio The Wunder Audio PAFOUR is the 19' rack mount, four-channel microphone preamplifier version of the PEQ1. The PAFOUR is a fully Class-A discrete 1970's-style mic-pre utilizing the exact mic-pre circuit as the PEQ1. The design empl
Zum Ende der Bildgalerie springen 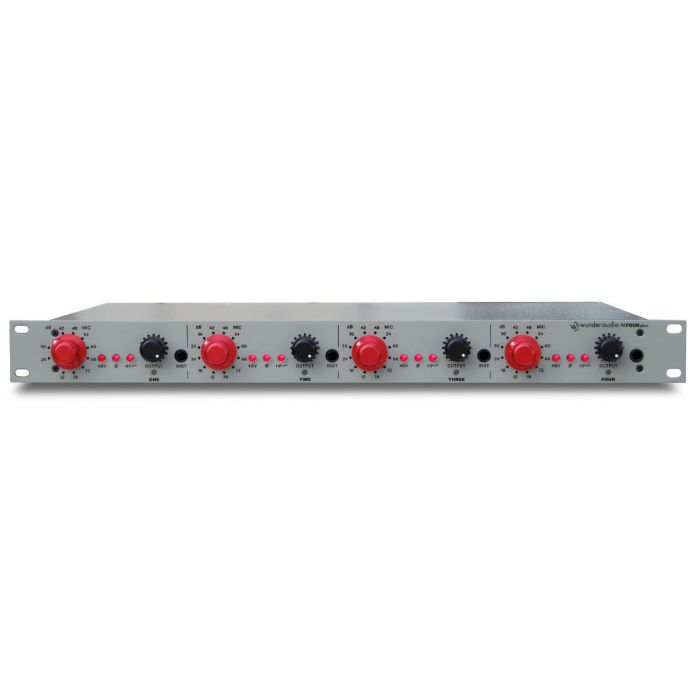 The Wunder Audio PAFOUR is the 19' rack mount, four-channel microphone preamplifier version of the PEQ1. The PAFOUR is a fully Class-A discrete 1970's-style mic-pre utilizing the exact mic-pre circuit as the PEQ1. The design employs proprietary, custom-designed mic, and output transformers. It is no secret that the huge sound is due to the make-up of the Mu-Metal transformers. In the PAFOUR, you get four channels of the Wunder Audio sound in one unit!

The PAFOUR cuts no corners. We have included the same exact transformers from the PEQ1. The mere size of these transformers is unprecedented in a 4-channel mic pre unit. The Core material was made in 1970 and yields a fat vintage sound with virtually no phase shift. The low turn ratio of the windings (1:1.4) yields a mic pre that can handle very high level with no need for a pad.

The Instrument Input circuit includes the complete Line Input stage of the PEQ1R so one can utilize the now famous way of recording, for example DI Bass Guitar, directly into the Line Input of the Wunder, instead of using a direct box approach into the mic pre. This line Input stage has a huge 60 dB of input gain! No other multi-channel mic pre incorporates this Line Input approach with this much gain.

New Added output stage. The mic pre is identical to what we use in the PEQ1 series but we added an additional amplifier stage at the tail end of the existing output amp for even more headroom .

Peak LEDs for each channel.

Enclosures are CAD designed to 1/1000' tolerance and are black-powder coated. PEM nut hardware is used throughout for solid construction. Unique transformer chassis mounts are used for structural integrity.

Custom designed knob sets are milled from aluminum and anodized red. Knob markers are embedded with white plastic dowels so the white mark will never wear off.